Save Fintech? Ban Short Selling. It’s Not That Simple


By Murray Gunn and Brian Whitmer

The pinhole puncture in the global “Fintech” bubble keeps growing, despite drastic attempts to seal it shut. The most recent and radical attempt occurred on February 18, when BaFin, Germany’s financial regulator, issued a temporary short-selling ban in Wirecard after its shares plunged 40% in less than three weeks. Wrote one news source, “Germany bans speculative attacks on Wirecard stock”, as if those shorting the market were wielding pitch forks and lobbing actual threats against the stock’s upside.

Incredibly, vilifying short sellers is as old as the market itself. The first short-selling ban occurred in 1610, after the Dutch East India Company crashed. Notorious short-seller Isaac Le Maire was barred from the market, leaving Amsterdam a pariah. In the 1790s, Napoleon Bonaparte charged short sellers with treason during the financial chaos of the French Revolution.

And, most infamous is Jesse L. Livermore, the brilliant trader who shorted the U.S. stock market in September 1929, earning $100 million ($1.7 billion in today’s money) in the ensuing crash. Livermore was publicly skewered in newspapers as the “Great Bear of Wall Street.”

Still, history shows that the draconian move of banning short selling is hardly effective. Amidst the Livermore debacle, the newly minted U.S. Securities & Exchange Commission made plans to reinstate a century-old short-selling ban, which didn’t go into effect until 1934 — after the U.S. stock market had already lost 89% in value.

In 2008, the SEC, acting in concert with the UK Financial Services Authority, prohibited short selling in 799 financial companies to stem the bleeding from the subprime mortgage meltdown. SEC Chairman Christopher Cox gave this assurance of the ban’s efficacy: “The emergency order… will restore equilibrium to markets.”  Yet, instead, the global financial sector entered an accelerated and prolonged period of chaos and value destruction.

Now, we have BaFin’s attempt to save Fintech by banning short selling in one of the sector’s most iconic companies. BaFin noted the importance of Wirecard to the German market and economy, and heartened: “There was risk of further downward spiral without restrictions on shorting the stock,” echoing Christopher Cox’s confidence in 2008. The strategy won’t work, because short selling isn’t causing the market’s decline; an ongoing negative social mood trend in Europe is. As the most sensitive meter of social mood, Fintech stocks warned of this shift long before there was a sustained downturn. (See other signs of a negative shift in social mood across Europe here.

The first signs began to emerge last fall. In September 2018, we observed how the financial technology sector had become another benefactor of society’s blooming optimism. But that optimism had then reached a dangerous extreme, as evidenced in the soaring valuations and growth forecasts across the industry. Soon after, Wirecard replaced Commerzbank, a 149-year old institution, on the DAX 30 index. We warned, “The Global fintech Thematic Index [is]on course for a jaw-dropping setback. … In fact so many mania symptoms plague the sector that the sell-off could be catastrophic.” 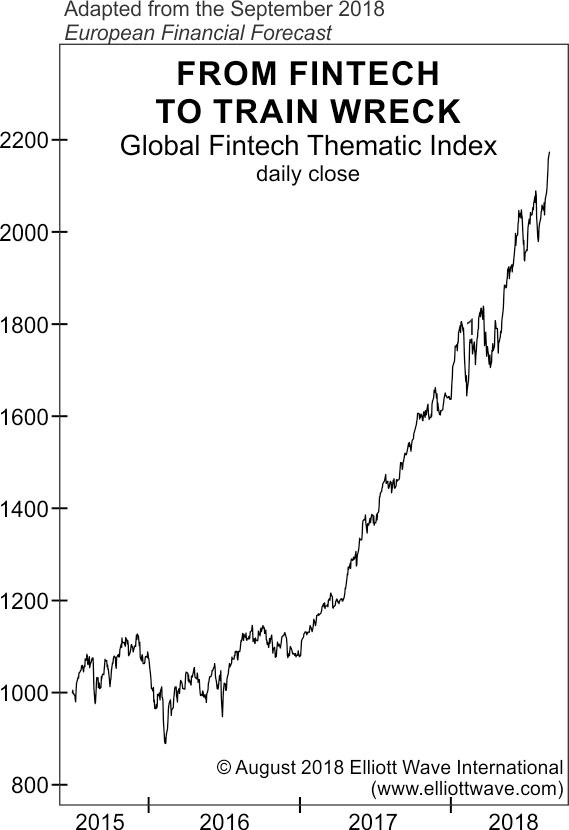 Depicted below is the sudden reversal in Wirecard and the Global fintech Thematic Index that followed, in which the latter’s shares dropped 57%. 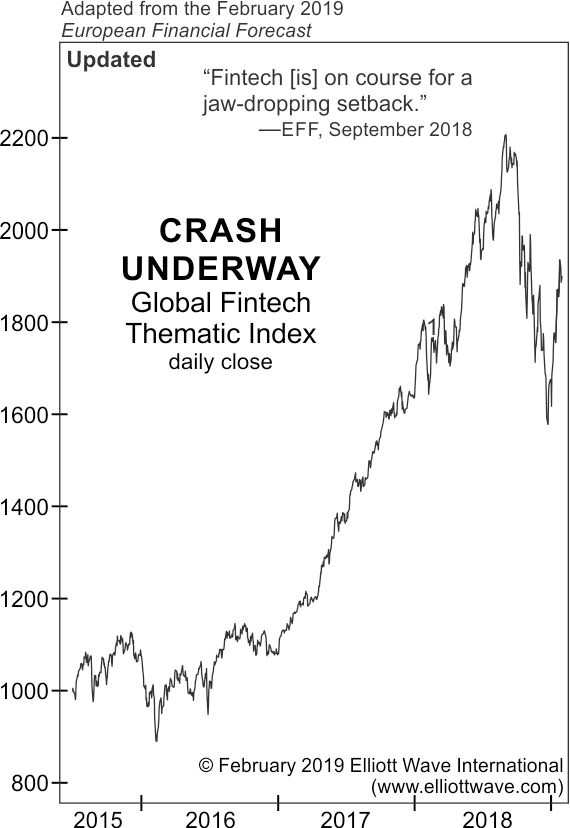 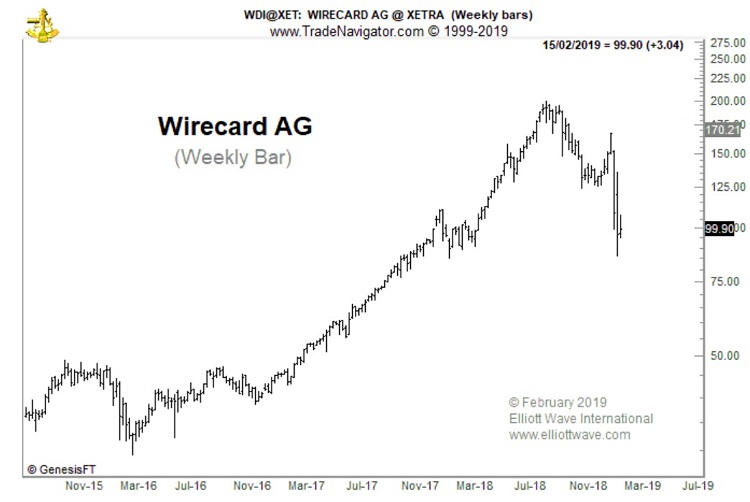 Jesse L. Livermore, the trader blamed for the 1929 U.S. stock market crash, was known to have said: “All through time, people have basically acted and reacted the same way in the market as a result of: greed, fear, ignorance, and hope.”

When there’s hope, and prices are rising, short selling is deemed a necessary part of a balanced system that encourages free will speculation. When that hope turns to fear, short selling is then vilified as the cause of market crashes. We believe many of the components of that shift are well underway in Europe now.